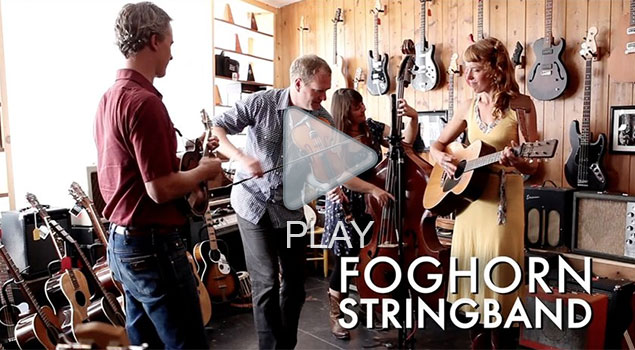 I had a wonderful opportunity to shoot and record a little video of Foghorn Stringband for Ed Helm’s traditional music website, The Bluegrass Situation (www.thebluegrasssituation.com). This kind of music is close to my heart, so it was a blast to get this time with such an amazing and talented group of folks.

We had an hour with the band and a crew of just 3, so I had to operate a camera AND run sound. The audio setup had to be fast and simple with great fidelity AND not clutter the frame. Using a Royer SF-24 in the center of the band allowed them to play in a traditional way – gathered around a single mic as was done for the last hundred years. It allowed them to huddle up close, and a great performance that you can only get when the band can really hear themselves and play off each other’s energy. The sonic character of the mic was a great complement to voices and the strings.

Regarding the technical side, we kept it simple so I didn’t need to do much fancy footwork in the edit and mix. I had the SF-24 front and center and tried to contain the performers within the front lobes of the figure 8. The room was tiny, but thankfully it was trapezoidal so there were fewer standing resonant tones in the room. The SF-24 is 9-% of what you hear in the recordings.

I panned out the Royer 60% left and right until the soundstage felt like it matched the visual, I put a little notch in the EQ around the lead singer’s voice to help bring it forward, and rolled off the bass of the SF-24 with a mellow high pass curve set at around 70hz (to clean up the room tone and leave space for a close mic I had on the bass, which was panned to match her position).

I had an AKG 451EB on the floor close to the bass, with a low pass filter set for 700 Hz, and a Beyerdynamic MC834 in the adjacent guitar showroom for nice real room ambience that I could mix in later if needed, rather than relying on reverb plug-ins. The MC834 had a high pass filter set at 500 Hz, and the mic was mixed back about 5 dB.

On the master, I pushed up the 300-1200hz about 1 dB, used a little preset compression that sounded good, added a tiny bit of reverb, and used a limiter with about 2db threshold to get the overall levels up for the video.

I recorded directly into a Tascam HS-p82 with no outboard preamps and mixed it all in Reaper with the stock plug-ins, on my laptop.